This should be filed under the 'why didn't I think of this earlier' category. Except that it didn't become as much of an issue until the iPhone 4 and @2x graphics started coming into play and needing to keep games within the 20mb download limit for downloading to an iPhone over the 3G network.

So, by using a single PNG-24 blank as the background of every card and then stacking a cropped PNG-8 of the card face on top of it, we can get a perfectly looking card with the full alpha channel shading at a fraction of the download size per deck.
iPad HD deck alone dropped from 1.62mb to 517k.
The full compliment of iPhone decks (multiple decks @1x and @2x) dropped from 5.63mb to 2.47mb.
A zoomed in look in PhotoShop can show very slight dithering on some of the face cards when converted to PNG8, but this will be imperceptible in the game. (Look at the blue border as it passes over the queen's head. See the dithering? I didn't think so.)

What WILL be noticed is that this frees up over 4mb for new content.

This technique could be used for any card game, domino game, etc. and any game that uses tiles or rectangle shaped game pieces.

You're welcome.
-Pete
Posted by Unknown at 11:03 AM No comments:

Spent all last week in Vegas playing ~$200 tournaments (Aria, Wynn, Rio). I played 6 and cashed in 2. But they were small cashes, so I ended the week down a bit, but played well and had a fantastic time.
Laurence "Luckbox Larry" Hughes had a great run in the WSOP main event, winning $36,000.

This week I've been making some drawings about what is on the horizon for the iPad and iPhone (Can't quite just call it iOs, even thought that's more accurate.) Here is a PhotoShop screenshot that should get the current fans of Heads Up: Hold'em or Poker 1 on 1 with Vanessa Rousso exited about what may happen next... 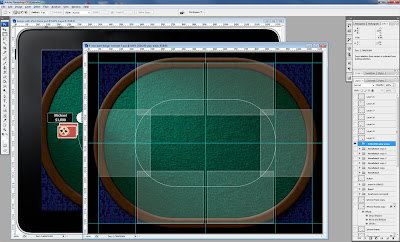 Posted by Unknown at 5:51 PM No comments: