Lots of fun times during the week in Vegas:
For starters, the FTP on the Go icon is on the wall at the Apple Store in Caesars Palace! I'm guessing it is also on the walls of most other Apple Stores in the country.

It is also shown on the video introducing the new iPhone 3GS. NICE! 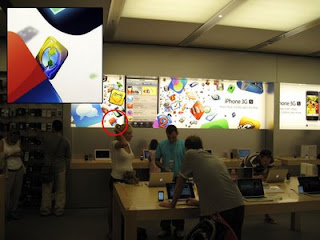 Next, Vanessa Rousso Played "Heads Up: Hold'em" and liked it! Here she is (it's a cell phone picture, sorry) next to the real-life "Luckbox Larry." We all had lunch together before she went to play day 2 of the $10k pot-limit Hold'em event at the WSOP. She placed 15th and won $43,000 in that event. 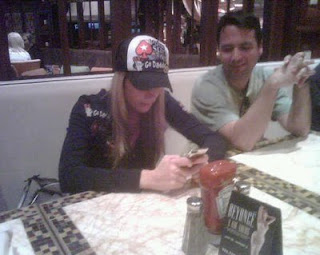 Lastly, although I was unsuccessful in any tournaments (Wynn twice, Caesars once, Planet Hollywood once) I scored a nice big $755 win playing $2-5nl cash games at the Rio. ($200 buy in, $955 cash out.) The big win came on my first day in town and really helped cover me for all the tournament losses.
Posted by Unknown at 4:57 PM No comments:

Ok, so our latest app, Poker vs. Girls was recently released. It's based on Heads Up:Hold'em with sexy pictures added. Marketing genius, I know.

It also includes an 'update check' which we will use to notify people when an update is released. From a technical standpoint, it's similar to the advertising shown in the free version of Heads Up: Hold'em except we aren't using it to show ads because it is a paid app and not a free app.

However, one of the bits of information given to our server tells us if the copy is legitimate or pirated.

On the first day of release, about 30% of the update checks came from pirated copies of the game. I thought that was shocking.

However, that wasn't nearly as shocking as the fact that on the second day of release, pirated copies of the software accounted for 95% of the update checks.

(June 4, 2009)
I'm going to take a break from posts about iPhone poker apps to let the world know that I was on jury duty this week. We just had the verdict today, and I can now legally blab about it. And that is exactly what I am going to do.

The charge was possession of crack cocaine. The defendant had been arrested by the anti-narcotics team doing surveillance in Occidental Park in Pioneer Square in Seattle. Those of you who know Seattle will not be at all surprised that there are many and frequent drug arrests made in this park.
Anyway, the surveillance officer watched the suspect from the 2nd floor of a building across the park using big binoculars. He saw the defendant make three 'transactions' where something small was taken out of one pocket, handed to the customer who inspected it, then paid cash which was put in his other pocket. He then called in the 'arrest team' which arrived about 30 seconds later. During those 30 seconds, a 4th transaction was made.
The suspect was arrested along with at least one other person in the park. This other person resisted and so the arresting officer for our defendant had to go help once our defendant was handcuffed. He was found to have just over $100 in the pocket where the surveillance officer saw him putting the money from the transactions.
However, when they got to the station, all they found was drug residue in the other pocket where he had been removing the drugs--not vials or bags with crack.

I believe this is why he was only charged with possession and not dealing; which is undoubtedly what the police were hoping for.

Two police officers testified (the surveillance guy and the primary arresting officer) their testimony differed somewhat, but I believed that the differences were the result of their different vantage points and also that they were describing events that happened very fast. The surveillance officer testified the he never lost sight of the defendant from the time he supposedly made the transactions to the time he was arrested.

The prosecution also had testimony from the lab technician who tested the residue and found it to be cocaine.

The defense tried to argue that the police were confused and arrested the wrong guy, but we were not convinced. The defense made this assertion using the (slightly) conflicting police reports, supposedly vague description given by the surveillance officer and that it was a dark night in a crowded park.

The defense then offered two stories to explain the unknown and unwitting source of the cocaine residue in the defendant's pocket.
The first was that nearly every dollar bill in circulation has very minute traces of cocaine on it. This is true. The bills in the pockets or purses of everyone reading this probably have trace amounts of cocaine on them. However, we did not believe that this amount rubbed off of money (micrograms) was enough to account for the (still very small) amount found in his pocket.

The second theory was that the defendant often traded clothes with his brothers, who live with him, and he may have been wearing a pair of his pants belonging to someone else and did not know there was cocaine residue in his pocket.
No brother was produced to testify about this. And the defendant said he could not remember if the pants were his own or not. It seemed to us that if someone innocently borrowed an article of clothing and was later arrested for felony possession of drugs found in that borrowed clothing that person would remember who loaned it to them!

The defendant also said that he had just been paid and withdrew the $160-$200 from an ATM and that accounted for the money in his pocket. No receipt or bank statement was shown to corroborate this. If the defense had produced a bank statement showing an ATM withdrawal in the week leading up the arrest, I believe we would have had a much harder time deliberating.
The same would have been true if either one of his brothers that he was supposedly meeting to go bar hopping with had testified to that.

The defense also had an expert witness testify who had tested the substance and had also found it to be cocaine. She tried to testify that she believed the amount in his pocket could have gotten there by rubbing off contaminated money, but the prosecution's cross examination really cut into her credibility and we rejected most of her testimony. While she seemed to be a credible scientist and evidence tester, her actual knowledge about transmission of drugs from dollar bills to fabric seemed to be little more than reading a Wikipedia page about it.
The scientist for the prosecution who had tested the residue initially seemed much more credible and knowledgeable.

What was troubling for all of us on the jury was how small the residue in his possession was. It looked like about 10 grains of salt or sugar.
However, we generally believed that he was dealing drugs and thus either had more and dumped them without the police seeing or there was some problem making them inadmissible. Or he had someone else holding his big stash of drugs and he just took a few at a time to sell, and had (luckily for him) just sold the last rock on him when the cops pulled up.

One note to either side (not sure which) is that if the actual money was still in evidence, the jury would have liked to see it. $100 obtained from several crack sales would probably look very different than $100 fresh out of an ATM. Whichever it was in this case, the money would have helped one side's arguments and that side should have admitted it, if possible.

Again, the difficulty in the case was that he was being tried for possession of such a small amount of drugs. There had to be much more to the story that we were not told.

Also, many on the jury (including me) believe that the drug laws in this country are ill-conceived and should be changed. But that was not at issue. We were to uphold the law as it IS, not as it SHOULD BE.

We found him guilty of possession of crack cocaine.

I looked at the defendant right as the word "guilty" was read by the clerk. His reaction was not that of an innocent person who had just been wrongly convicted. It was that of a guy who thought maybe he could beat the charge and didn't.

We would have liked to offer suggestion for a lenient sentence and our sincere hope that the defendant could get his life together and get away from drugs and dealing. But, contrary to what is often shown on TV, juries don't get to do that.