Get it here!
Heads Up: Hold'em HD was approved late last night. If you've got an iPad, it's pretty great!

The winning-hand-glow will be added to the iPhone version(s) very soon! Seeing the glow in action was a "Why didn't we do that a year ago" moment.

Why does it give me joy that the "Settings" button has the king stabbing himself in the head? I don't know... (But I'm the guy who made the settings button, so it wasn't just an accident.) And it gives me further joy that it kind of looks like a swordless hilt on the dark background... 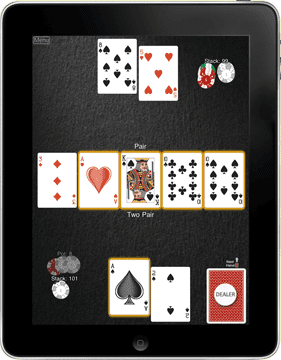 Heads Up: Hold'em HD for the iPad is submitted to Apple and should appear in the AppStore very soon! I played yesterday's build on Mike's iPad and it is extremely cool. We added a few fun iPad exclusive things, such as:

Much bigger and more 'real' looking cards. This is a big improvement with the additional screen real-estate. We didn't need to stylize the cards like on the small iPhone screen. The player's cards and the board cards are all the same size. Just like in real-life.

We added a glow to the winning 5-cards. (Not so "just like in real life.") This will probably be added to the iPhone game in the next update. And will (hopefully) cut down the confused emails from people who don't understand when their pocket pair gets counterfeited.

Chips show in your "Stack" so you don't just have a number to go by. We also added so pushing in your stack pile will go all-in without needing to spin the chips over into your bet pile.

Bluetooth covers all versions of the game. so iPad vs. iPhone/iPod works.

We added a "$1k Flip" as a bonus (totally skill based) game against Money Mark. You each throw $1000 into the pot and deal the cards to see who gets it. Flip4rollz, baby!
This idea had been around for a while as something fun and silly to do but we just over-thought it and anticipated that it would mean writing a special-case game... All we had to do was set a crazy structure: $1000 buy-in, $1000 stacks, and blinds at $1000-$2000. Let the regular game rules take it from there. With the Play-Again button, you can mindlessly gamble all day!

We added a game-logo card protector for winning a hand with Jh-Js. These cards also are modified in the deck to look like each half of the game's logo. (The first version of this card protector was in a square border, but it was unplayable because you always thought you had been dealt a jack when it was sitting on top of your cards...)

This one should have been in the iPhone version, but we just plain forgot. An "Aces Cracked" card protector.
Posted by Unknown at 11:23 AM No comments: 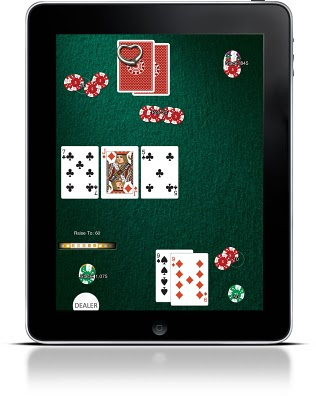 It's still preliminary, but the iPad version of Heads Up: Hold'em is coming along nicely!

One irony is that I haven't actually played it yet (Mike has) because I'm waiting for the 3G iPad. I'll probably go play the game on Mike's iPad in a day or two when a few more changes have gone in.

It is looking pretty cool! The cards look more like a real deck of cards. You can see the chips a lot better. (And you can really see how grimy and gross I made the cash-game chips--just like in real-life.)

The plan is that the controls will work about the same as the iPhone, but moved around a bit so it can be operated using your thumbs while holding an iPad in both hands...

It will feature at least one new (exclusive) card protector for winning a hand with Jh-Js (the game's logo) and possibly also an "Aces Cracked" award which *should* have been in the iPhone version already. :-)

Bluetooth games will be compatible with the iPhone version.

Look for it soon!!

PS: Version 3 of the free iPhone version is submitted and should also be available soon...

PSS: Camera for iPad has been getting lots of press and is one of the top iPad photography apps. It lets you use an iPhone as a wireless camera for an iPad (or iPod touch).
Posted by Unknown at 2:02 PM No comments:

Heads Up: Hold'em version 3 is out

This post will be pretty short and sweet. Heads Up: Hold'em version 3 is available now. I am incredibly proud of this game and I can't wait for people to see how much fun it is to play the wireless 2-player game!
Go get it!
http://app2.it/poker
Posted by Unknown at 7:49 AM 6 comments: