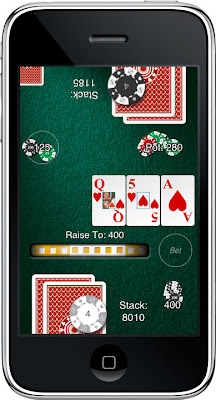 Let's start calling this thing "Version 2" instead of Version 1.1. There are some big (VERY BIG) changes here.

The game you know (and hopefully love) from version 1 is still intact. Essentially unchanged. No worries there.

The 'with chips' version of the game is looking fabulous. This is pictured here. The elegance of the original is maintained. The only item added which looks more like a UI feature from software instead of just the cards and chips is the 'spinner' which is used to set bet amounts. I even made this look like a poker chip a little bit to keep the theme.
While this should be clear from the picture, set the bet amount with the spinner and then push the stack of chips into the betting circle to commit it. Simple, nice, as close to a real game as we could simulate.

The "stack" graphics (shown in the draft picture on my previous post) were cut for simplicity and screen size limitations. It also means that every chip shown on screen is currently 'in play.' And it matches the online poker clients which don't try to show a player's chips graphically and just give a number.

Remember when I said there would not be a computer player?
I believe it went something like

There have also been requests for a single-player version. I don't think this will happen.
...
Seriously, people: POKER IS A GAME TO BE PLAYED AGAINST OTHER PEOPLE NOT AGAINST A COMPUTER!

Well, I was wrong. there WILL BE a computer player that you can play against. We are currently working on the AI to make it play some reasonably decent poker. It's close.

Finished:
Current development:
To-do:
And there you have it!
Posted by Unknown at 9:55 AM