Not a Tourist 5 (A Tourist Again)

Last weekend, Alice and I visited Brighton, and so we were tourists again! Brighton is a crazy beach party town. The beach and boardwalk is kind of what we both picture Coney Island being like, except that neither of us have ever been to Coney Island. Fun times.

The Weather was beautiful, so we weren't the only ones who decided to drop by for a visit... 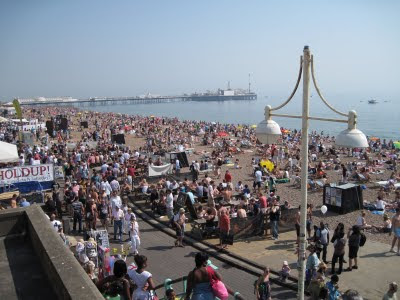 We saw most of the sights: The boardwalk, the beach, the royal pavilion, the lanes, we had a Pimm's, we had an English Breakfast, we had a good time, and a nice relaxing weekend. Ahh, to be a tourist!

The rest of this blog entry one is going to be a little scattered and random, because it's kind of a recap for the past while...

Someone Will Be Along For That
It is very much part of the culture here to let the staff clean up after you at restaurants, bars, etc. Not sure if this is a result of the class system where you can't be bothered to bus your own dishes, or do things for yourself, but people pretty much leave their beer glasses wherever they are and let someone else worry about cleaning it up. To the point of just setting the empty glass on the ground. It is common for the bars to overflow into the street after work when the weather is nice, so, yes, literally, you just set your empty beer glass on the curb and let someone else worry about it.

Bin It
This one is a bit shameful. OK, very shameful. There is no recycling system at the temporary house, so everything just goes into the trash. "Bin it!" And I'm ashamed to say that this really makes life easier. If you just don't care about anything and toss it in the bin. Hopefully our permanent home will have recycling and we can become good citizens of the world again, but in the mean time, it sure saves time and thought and energy when you just toss everything into the bin when you're done with it.

Scotch Egg
I ate a scotch egg. This is a hard boiled egg covered with sausage and breading and then fried. It tastes exactly like you'd expect it to taste. (Unless you were repulsed by the description, then it isn't as bad as all that.) Which is pretty good. Nothing life changing, but pretty good. Not as good as sausage rolls.

Pickle Sauce
Why don't we have pickle sauce in the USA? This isn't pickle relish, but this funny dark brown chunky sauce with onions and other vegetables that have been pickled. This may also be called "Sweet Onion" Sauce. It is the most perfect condiment for sandwiches or practically anything! The brand we found at the grocery store is Branston, but there are probably others available. (Which brings me to...)

No Brand Loyalty
I realized that Alice and I really have no brand loyalties when it comes to food. Which makes the transition from USA to UK food quite easy for us. We don't miss specific brands of food that are unavailable here. Salsa and things will taste different and be harder to find, but we won't ever be looking for any one brand and then get annoyed when we can't find it. Salsa here may taste different than salsa in the USA, but we were always buying different and funny salsas back in the USA, so different bottles tasted different back there, too.
I'm not saying this is a good or bad trait of ours, just that it's the way it is.
The one exception to this is the Rooster Sriracha sauce which Alice puts on just about anything. They sell other brands here, but they are not the same bright red that we have known. And they have a swan or something on the label, so it isn't Rooster Sauce.

The Royal Wedding
The royal wedding is this Friday (2 days from now). We will either go to a local street party hosted by The Charles Lamb Pub in Islington, or we will watch with the masses on big-screens in Hyde Park. I'm trying to convince Alice that we should go to the local pub just so we can avoid all travel and transportation that day, and also so we will be a mere 3 or 4 blocks from our apartment with its personal and private bathroom. But I think Alice really wants to go to Hyde Park, so we'll probably end up going there.

Speaking of which, at the grocery store, they are selling Will & Kate Commemorative Pies. Steak and bacon Pie, I think (meat, not sweet). Alice took a picture.

Speaking of Meat
We had conveyor-belt sushi, and they had steak sushi. Alice grabbed it, thinking it was tuna, but it was steak. They also had a tempura shrimp atop a sliced up tempura chicken breast. So I got to eat a few extra sushi. Otherwise it was pricey and not so great, so we probably won't go back.

And Not Speaking of Meat
Bits in pubs don't eat. Except maybe a bag of crisps (potato chips). They go, and have their pint of beer, and don't eat anything. Seems strange since Americans seem to eat wherever they go. We're such pigs, and not the kind that you make Royal Wedding Commemorative Pie out of.

Still Not Quite Here
We should be moving into our permanent home at the end of next week. It will be nice to start feeling a little bit more settled... Especially for me. Alice is fully set up at work. I'm still working off a laptop on the dining room table. Islington is great, though, and hopefully Putney will be just as good or better.

Land Of The Free
Last week, the DOJ shut down the major online poker sites in the USA. Why does America call itself a free country? I managed to change my PokerStars account to the UK before the shut-down, but my Full Tilt account reverted back to my USA address and I can't play on it now, even though the country I live in doesn't mind if I play poker online.
One irony that has not been talked about much is that online poker allows people to gamble LESS than casino poker. When playing online, I generally play with blinds of $.10-.25 or $.25-.50. Occasionally $.50-1. Or I play tournaments with a buy-in between $5 and $25 but usually in the $5-$15 range. When I go to a casino, I play $1-$2 or $2-$5 blinds and tournaments that cost $50 - $225. A bad night at the casino can cost me more than a bad month can online.
All the talk is about the people gambling for huge stakes online, but the vast majority of players--recreational players like myself--play for a pittance. What we would otherwise spend renting a movie or for a World of Warcraft subscription. Online sites can offer penny poker. Casinos can not. And the truth is, most of the time I would rather be gambling for less. I am much happier playing $.10-.25 than $2-5 (here it's £2-5 which is even worse).

No Cars
At the Shell station up the street, gas/petrol costs £1.38 per liter. I'll tell you the math, but make you multiply it out yourself:
£1.00 = ~$1.65
1 gallon = 3.785 liter.
Part of me wishes that the USA would tax gas up to this price and force us to come up with better transportation. The bus and underground and train system in London is amazing. We we ever want anything like this in American cities, we'll need to start now and work hard and pay for it.
Posted by Unknown at 9:52 AM